“You’re gonna need a lot of soil to fill that hole”, said my husband after we removed part of the deck and discovered a 400mm drop to the ground. Even he didn’t know just how much! 6 cubic meters later and we’ll need more!  But the garden is definitely progressing…

When the soil arrived this morning I have to say I felt a little nervous. The truck delivering it was very large! The mound they tipped onto the driveway was much bigger than expected!

We’re using a granitic sand (also known as Tooborac Toppings), to create a path through the garden which will lead you  to a little seating area with a water feature.  I’m advised that this sand can be compacted down so it doesn’t just spread all over the garden!

So when another truck turned up with the sand and dumped another huge pile behind the first lot, I was started to feel very nervous! How would they move all this  by this afternoon? Will my neighbours start complaining we’re blocking the path? Will they clean up the trail of mud through the courtyard!?  Ah the joys of creating a garden! 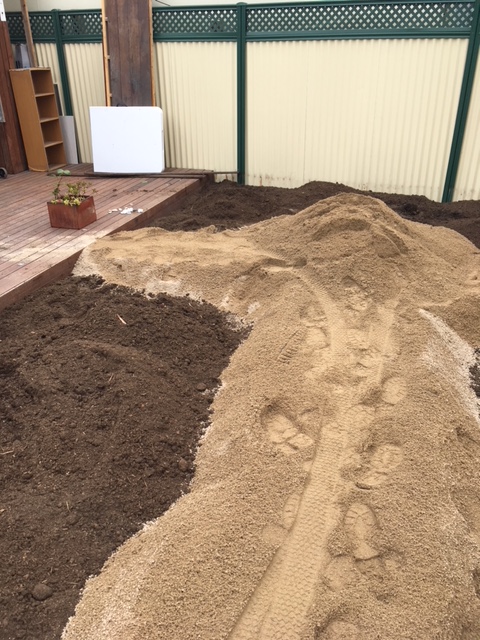 But the early results are very pleasing… the garden is coming together.  It even smells better 🙂 It has some order; the path is defined and the sand and earth look good together.  We might even have a garden in time for a planned birthday celebration… let’s see….

Work is underway to return my formerly ‘aircraft-hanger’ covered garden back into a nearly wild native space for our local birds and wildlife.  I’m very excited that I’ve managed to find a local gardener who sees the same vision as me and we’re hoping to get started next week.

It’s a funny thing creating a garden.  For a while I looked out on what was just a barren patch of dry dirt which was uncovered when we removed part of our timber deck.  It looked very unloved.

Over the past weeks, due to considerable rain and blazing sun in equal measure, weeds have established a foot hold.  Now initially, I wasn’t happy with the weeds as all I saw was the painful job ahead of removing them.  They go from a few green plants to fully- blown giant invaders seemingly overnight.  They nearly cover the bare ground now.

Strangely, now when I look out of my lounge window and I see their seeded, bobbing heads, I don’t feel annoyed in fact the opposite because the weeds have brought life back to my embryonic garden.

Already, butterflies have returned. Mostly Cabbage Whites but also lovely Dainty Swallowtails who until now only frequented the Melaleuca tree on my nature strip. I see at least one now every day and they always lift my mood as only a large, colourful butterfly can.

Wattlebirds and Blackbirds visit (probably after the caterpillars I am sure are being left behind!); enormous Dragonflies zip about on the hunt and Rainbow Lorikeets have visited to eat berries from my neighbours’ tree which has only been revealed due to the demolition.

A neighbour who knew about my garden renovation offered me four of her most treasured plants that she no longer had space for, now that she was moving house.  So I was gifted a large, thorn-less Lemon Tree full of fruit; a beautiful pink and white

flowering Pelargonium, a scented Yellow Rose and an Agapanthus, all potted and happy to sit on my deck until a space can be found for them in the garden (although the 42 degree days did challenge all of them).

Next stage is to bring in at least 7 cubic meters of earth and start adding structure to the garden.  The weeds will have to go but I’m sure some of them will find there way back. Along with the butterflies.