December 8, 2017 Pamela Sutton-Legaud CFRE
So a few things that will keep me busy in 2018 and may be of interest to you or a local community group! I’ve recently joined the board of Seddon Community Bank which is a part of the Bendigo Bank Group and also BirdLife Australia.
Seddon Community Bank provides sponsorship and small grants to local groups so if you know of a group looking for financial or in-kind support  around the Seddon area, please apply for assistance for 2018.
Every Bendigo community bank distributes the majority of its profits (in some cases more than 80%) back to their community so if you are not in this area, please look for your local community bank.
With this in mind, Bendigo Bank has created a family and friends offer to anyone looking for a loan or banking advice.
As it’s nearing Christmas, you may be thinking of making a donation to a worthwhile charity. If so, I can recommend to you, as a dedicated birdwatcher, BirdLife Australia.  I recently joined the board of BirdLife after many years of support and know that Australian birds and their habitats need all the assistance they can get.
You may know (how could you avoid it!) that as an avid birdwatcher, I take a lot of photos and post them on Facebook and Instagram.  Love to hear your comments 🙂
Thanks for taking time out to read my update. I wish you, your family and friends a wonderful, safe and happy Christmas and hope to meet up with you in the New Year.
PS: Please do share these links with friends and family.  Merry Christmas!

It’s another January 1 and the New Year sits before us.. untouched waiting for us to decide what to do with it.

You can choose to make no resolutions about the NY. Many do (or is that don’t).  While I understand it feels like a waste of time if you don’t follow through, at least you had a goal to aim for.  Is it better to have no goals at all and take what comes?

So this year my resolution is specifically vague.  I’ve resolved to do something new (and positive) every day. That is, something I’ve never done before.  So that’s specific. And the vagueness is that I’m not going to plan what that ‘new good thing‘ is. I’m just making a commitment to do something new every day.  It doesn’t have to be incredibly dangerous, exciting or mind-bending, it just needs to be new.

So. January 1.  I kayaked down the Goulburn River to birdwatch and enjoy the gorgeous scenery.  Well not all of the GR but a nice, friendly non-rapid bit with my husband and a friend who showed us the way, let us use his kayaks and drove us back and forth! That is friendship, I’m sure.  In return, I pointed out the birds I recognised… a few Darters, lots of Little Corellas, 2 wonderful, delighting Kingfishers, lots of ducks, a Currawong singing in the trees, lots of noisy Cockatoos.

As we were visiting friends in a beautiful part of the Victorian farming region, perhaps it was easier to find something to do that I’d never done before. The more difficult thing will be to discover something different just as part of my normal everyday routine when I’m at home with the cat and wondering why I can’t watch foxtel for another hour.  Let’s see.

Happy New Year. And may many unexpected, happy, healthy and magical experiences come to you whether you resolved it that way or not!  PS Thanks BirdLife for the photos … I was too busy trying to stay in the Kayak to take photos! 🙂

A little addendum to my last post. BirdLife has just put out their formal Christmas campaign and given how much I like birds and want to protect them, I’m giving them an extra plug.   They have some really lovely bird-related products in their online store.  And who can resist a baby bird in a santa hat?!

For the first time Zoos Victoria and our Foundation (fundraising and sponsorship) team were recognised by the Australian Fundraising Institute for our very special fundraising campaign leveraging the 150th anniversary of Melbourne Zoo.  It was my privilege to head up the ZV Foundation during this highly creative period, a role I still hold.

One of the main projects was Mali in the City with 50 sculptures of our very own (then) baby elephant Mali were painted by professional and amateur artists and positioned all around the city. Each sculpture had a paid sponsor for the period of the installation and at the end of the exhibition, all of the sculptures were successfully auctioned off. A wonderful event that brought the Melbourne community back in touch with its fantastic city Zoo.  We raised almost AUD $1m with the campaign across our various events and activities for our Victorian and International conservation programmes. And had a great time in the process!

Here’s the story which was featured recently by the FIA talking about the awards:

Winner of the 2014 Most Effective Creative Campaign and the 2014 Special Projects, Events Award 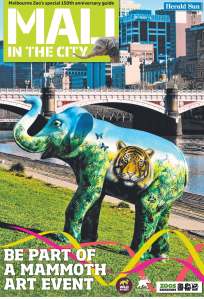 What does winning this award mean for your organisation?
Winning the award meant a great deal for Zoos Victoria, in particular helping to acknowledge the hard work of a team of people that worked on Melbourne Zoo’s 150th Anniversary celebrations. It was also significant as it further demonstrated the love that people all over Australia share for Melbourne Zoo and Zoos Victoria as an organisation but also the love people feel for the charismatic animals that live at our zoos including Mali the Asian Elephant. Being successful in reaching a large number of people with our anniversary celebrations was extremely important for our organisation as it meant many people became engaged in our fighting wildlife extinction work and at the end of the day – this is the most important message.

How has it impacted on your work in terms of campaign strategies, staff morale etc?
The Award was a huge boost for the many teams involved in Melbourne Zoo’s 150th Anniversary celebrations. It was nice for staff to be publicly recognised for a campaign which touched so many different people. It has also made staff feel proud to be part of an organisation that is fun, has the ability to be bold and, above all, to be part of an organisation that the community clearly values.

Briefly tell us about the campaign that won you this award? What made this campaign so successful?
We won the Award for our 150th Anniversary celebrations which took place in 2012. In particular, we held a public art exhibition called ‘Mali in the City’ which saw 50 life-size artist decorated fibreglass elephant sculptures displayed all over Melbourne’s city streets and later sold at auction with all proceeds donated to Zoos Victoria fighting wildlife extinction efforts. The campaign was extremely successful as the sculptures were modelled on the exact dimensions of Mali the elephant, (at the time) a two year old elephant calf who was the first female elephant calf born in Australia and arguably one of the most popular animals at Melbourne Zoo. The campaign was also extremely unique, it was eye-catching and helped to brighten the wintery streets of Melbourne and it involved a large number of local people from local business to community and high profile artists.

Why did you/your organisation decide to submit an entry?
We decided to submit an award to help recognise the huge amount of work dedicated to the project by a large number of staff members across many departments of Zoos Victoria and also to help acknowledge the incredibly positive support from the Melbourne community. It was also another avenue to help raise awareness of our fighting extinction work with threatened species within a community that cares about causes.

What advice or suggestions can you give to other members considering submitting an awards nomination?
The Awards are a great way to celebrate your team’s hard work and successes within the fundraising industry. It was also a good way to benchmark your campaigns against what the rest of the industry is doing. In particularly winning the award had numerous benefits including media opportunities as well as the opportunity to build new relationships at the Awards event.