Keeping one’s blog up-to-date is important and the same is true with the associated website! I felt mine needed a good refresh so I’ve implemented an upgrade and reorganised my site. I’d love to hear your feedback. If you think it’s better than before let me know.

As I’m not so active on Facebook I’ve moved my bird photos onto this site and you’ll find them here  I like taking time to write about the things that interest me – and my interests are varied and on occasion, unrelated – but  I want to spend less time online … this is a challenge for all of us I’d say.  I find Facebook has become just a series of anonymous videos for the most part as many friends ‘follow’ but do not post or like so therefore communication has become a bit one way. So I’m putting my efforts into this site. Such as they are.

I have new projects I’m working on and hope to share them here soon. Less time on line (I’m hoping) means more time for real world projects to be completed.

If all of this makes sense to you, please let me know. We’re all friends here.

There is a great site I like to visit where I can see creative experts in action, Craftsy.com.  I dream of the day I will turn into a committed crafter instead of an art procrastinator. This Mothers’ Day Craftsy.com is doing a free Watchathon weekend where you can watch all their crafting videos for FREE! Love it.  I may not leave my computer long enough this weekend to put any of it into action (that’s not procrastination you see, I’m studying).  Want to join in? Here’s the link.

I’d love to be one of those people who can just get on with a great creative project and voila: days, weeks or months later they have a finished result. A great dress, a soufflé, a coastal water colour or a beautifully beaded bag… this is, unfortunately, not me.

I may not have time to knit that amazing scarf, jumper… you name it, I promised myself I’d make my mother in time for THIS Mothers’ Day but I’ll be ready for next year. Maybe even start a great quilting project to make in time for Xmas?  So what are you waiting for, get crafty here!  I’m right behind you 🙂

I’m out and about in London. And I’m not the only one. I find myself here on a historic day when the question everyone asks you on first meeting is: are you In or Out. There can only be one subject under discussion on a day when everything changed but it all seems much the same.  U.K.is leaving the EU.

On arrival in London I headed for High St Kensington towards the Gardens to an annual antiques and art fair. Couldn’t afford so much as a photo of most of the glorious items on sale but I thoroughly enjoyed the experience.

I discovered the fabric designs of Edinburgh weavers and of Henry Moore and was reminded how much I love textiles. I was moved by the slightly eerie sculptures of Phillip Jackson.

Everyone I met was remarkably friendly, sharing knowledge freely and without a hint of disappointment that I wasn’t likely to be handing over my Amex any time soon. Even for the very small, framed piece of fabric by one of those little known Edinburgh Weavers. No really I couldn’t afford even that. Thank you so much.

I was (again) reminded just how much collectors are wiling to pay for Chinese art… A tiny Chinese ceramic pot much like an egg cup was on sale for well over $10,000. I couldn’t figure out why either. 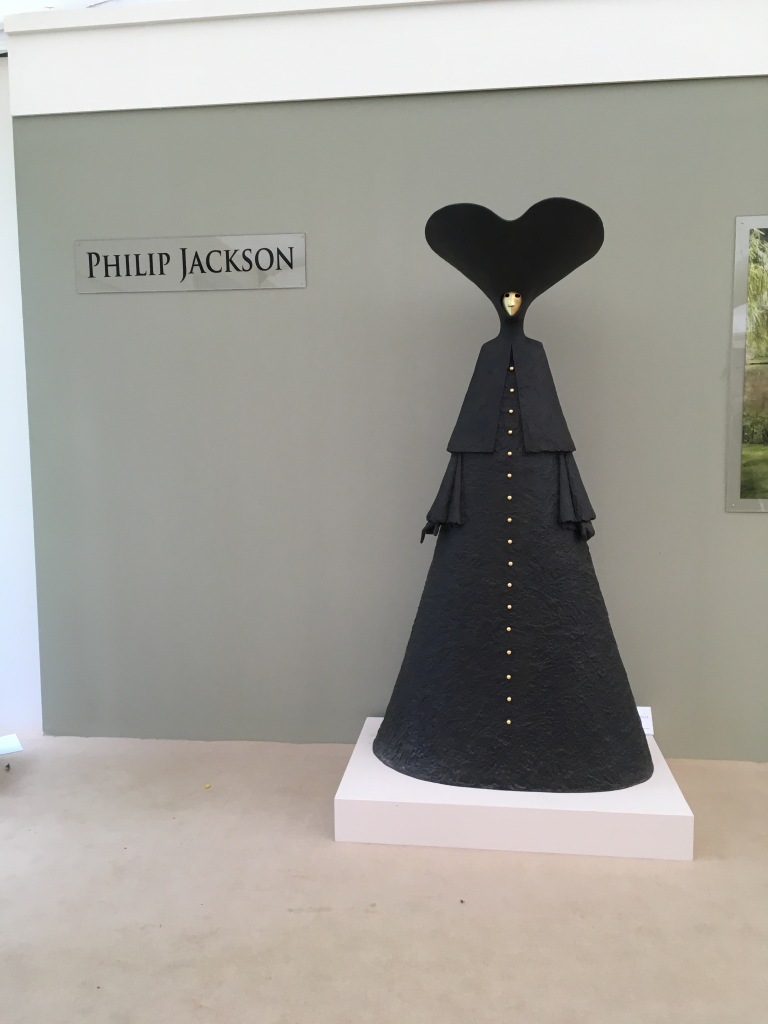 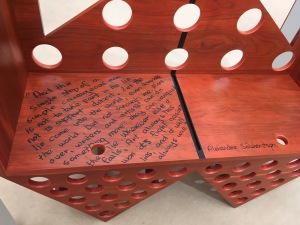 I stopped for a sandwich on the temporary balcony created for the purpose at the show which overlooked the gates to the Kensington Gardens.  As I munched my salmon bagel, I chatted with a couple of the dealers. One lovely lady saw no irony in bemoaning the fate of her family gardener’s need for 2 jobs to make ends meet and citing this type of situation as the reason for the Out vote. Perhaps we should all hire a gardener. 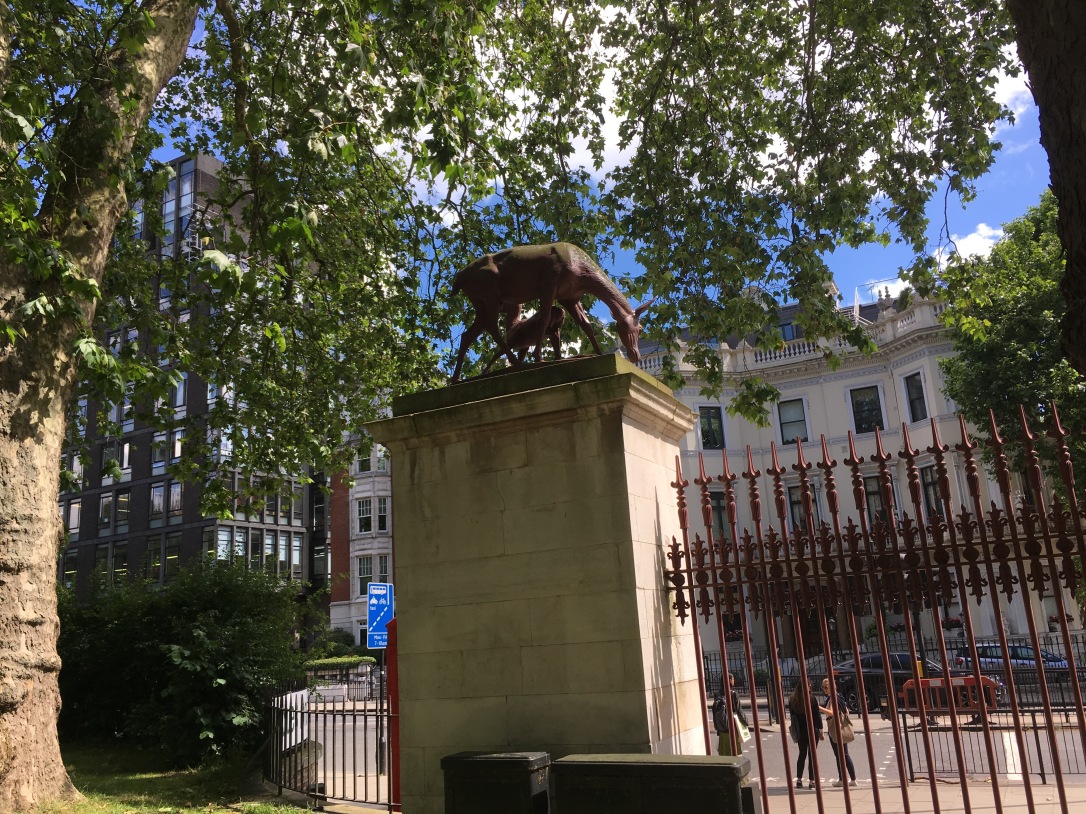 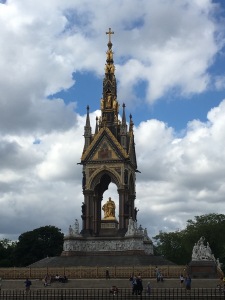 I still hadn’t had my fix of culture so headed for the V&A via the Royal Geographic Society which had a free exhibition of aerial views of the U.K.  Seems everyone is looking at the big picture today.

Now I’m sitting in the internal courtyard cafe at the V&A museum sipping my annual Diet Coke on ice. I’ve found a quiet haven. In fact everywhere I’ve been today has had an unexpected air of tranquility. (Even Euston Station!)

The V&A gift shop is my last stop and what do I find but a piece of fabric the design of which is by none other than one of those Edinburgh Weavers, Keith Vaughan! This one I can afford!

I’m so delighted with my find as I feel I’ve discovered an unrecognised artifact after my lustful musings on similar exhibits at the art fair. So I buy two pieces just to reinforce the fact to myself!

It’s been a big day. Time to go back in; everyone will be out again tomorrow.

Today was a gentle ‘at home’ day.  After the rigours of river kayaking on New Year’s Day, I tackled the garden: weeding, sweeping and generally cleaning up the mess left by my bird friends… mostly empty husks from the bird seed I give them.  (Why do the makers put grass seeds in the  wild bird mix? It makes such a mess and yes, makes unwanted grass grow in my flower beds.  Answers please!)

Addressing my goal of ‘do something good and new each day’ was a bit hard as I didn’t really leave the house (if you don’t count the garden). And you can’t count the things I’ve just been thinking about doing.  I’d been baking and cooking over Christmas so I wasn’t game to get the oven going again quite yet and anyway it’s too hot to bake so no new culinary delights would be attempted.

So as my Day 2 task, I decided today would be a day when,while I worked in the garden, I would only listen to artists I don’t usually listen to. So to keep me company I had, amongst others, the incomparable Amy Winehouse, Adele, Pink, Katy Perry, Taylor Swift, Motorhead, ACDC and Michael Jackson, Maroon 5, Hozier, Ed Sheeran, Meghan Trainor, Pharrell Williams… Bon Jovi!

I didn’t edit, just listened to what came up in my YouTube mix… made me listen to and enjoy music by artists I would never have thought I’d be interested in and made me realise I’ve been listening to SO MUCH OF THE SAME OLD MUSIC/STUFF FOR YEARS! Don’t get me wrong, vintage music in all its forms is great… I can never get enough of Nina Simone or Edith Piaf but it’s particularly good to listen to some young women from different genres and eras.  And if I’m not listening to one of them, I would usually listen to a talking book or ABC Radio National! GAD!

Ok on the scale of ‘something new’ it’s a pretty small beginning, I admit. But you have to start somewhere with your resolutions! And maybe it helped me start to break a music habit. Tomorrow I fly to Sydney … that should be a surefire place for ‘new and good’. If you have any listening suggestions for women vocalists and musicians, I’d love to hear from you.

PS: This evening, while walking to the nature reserve near our house, I saw a 40+ yo man on a skateboard (looking both uncomfortable and decidedly embarrassed) and I can only assume he received said skateboard for Xmas. Also two young men were sitting outside on the deck at the (closed) school near the reserve, drinking beer and playing chess.  So perhaps others have taken up the ‘do something good and new each day’ challenge.  Otherwise, there’s been a shift in the universe of which I am only just becoming aware.

PPS: My garden is looking hip and tidy thanks to the accompanying beats! And that’s a good thing!

What do you mean… what music store? I know, so many of them have vanished, eaten up by the e-monster that is that online fruit store but if you can find one (and I’ll let you in on the secret of a few of my favourites as a gift for your kind attention) then you are in for a treat.

Today, I walked around my absolute favourite and came away buzzing with creative ideas. Is it the fact that they have reintroduced actual LPs? With cover art? Joy! Is it the rows of beautiful art books that have recently appeared? Double happiness! Or perhaps it’s the calmness of the music playing and the almost mystical potential of rows and rows of fabulous and enticing CDs? All of this was experienced by me spending 1o minutes (which should have been spent rushing to my parking meter) in a joyful, tactile, friendly, sense-enhancing environment. But for my need not to have a parking ticket (so I have more cash to spend on music) I would have spent more time testing the knowledge of the store manager about whether, really, there is a definitive Ella Fitzgerald collection.

Yes! I know as soon as I buy the CD I’ll upload it and probably never look at the cover again. Yes, I also know that beautiful art book that I covet and think will make a great gift will stay – after purchase – on my own book shelf because, really, let’s face it, no-one else will really appreciate it as much as I do.

As I departed the store with the tips of my toes a few centimetres above the pavement, into the glorious sunshine of a Melbourne late-spring afternoon (before the cool change: Melburnians, you know of what I speak) I fancied I had discovered something new, a place to recharge my batteries and my creative notions.  In fact, it was a trip to the past and also a sign of things to come when we remember WE LIKE SHOPPING IN REAL STORES! So. Just in case you do in fact still have a music store (or for that matter a book store) in your part of town, protect it. Love it. Visit it. And buy things. You wont regret it. 🙂

A few of my favourite music stores:

I heard David Bromley speak at a design event with Coco Republic, the furniture/design company in Richmond, Melbourne. He was very entertaining. He made me reflect that it is most important that as a designer or an artist, you do something to progress your ideas.  It made me reflect on what it means to be an artist or a designer. Is it that you make money from your efforts? Is it that others recognise you? Or is it that you DO your art. You create. This is more important that what you do or how you do it. Do something. Take action. Review. Take Action again. Simple but profound. Yes. Easy? No. As David himself said, to paraphrase, the harder you work, the easier it looks.

David Bromley’s artworks have two clear focal points – the Boys Ownadventure project and the Female Nude series. Born in Sheffield, England, in 1960, Bromley came to Australia in 1964. He began his career in Adelaide as a potter, but eventually turned to painting. He takes inspiration from childhood books, popular culture and artists such as Andy Warhol, Roy Lichtenstein and Glen Baxter.

Bromley focuses on the physical and emotional journey of life’s travels, using the imagery of the Boys Own comic culture to paint vivid, passionate pictures of the spills and thrills of childhood. He centres on the adolescent years where he believes life is at its most intense and its demands are at their strongest.